In a growing number of states, patients who get opioids for serious pain may leave their doctors’ offices with a second prescription — for naloxone, a drug that can save their lives if they overdose on the powerful painkillers.

New state laws and regulations in California, Virginia, Arizona, Ohio, Washington, Vermont and Rhode Island require physicians to “co-prescribe” or at least offer naloxone prescriptions when prescribing opioids to patients considered at high risk of overdosing. Patients can be considered high risk if they need a large opioid dosage, take certain other drugs or have sleep apnea or a history of addiction.
Such co-prescribing mandates are emerging as the latest tactic in a war against an epidemic of prescription and illegal opioids that has claimed hundreds of thousands of lives over the past two decades. 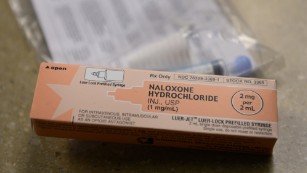 What is naloxone?
The Food and Drug Administration is consideringwhether to recommend naloxone co-prescribing nationally (an FDA subcommittee recently voted in favor), and other federal health officials already recommend it for certain patients. And the companies that make the drug are supportive of the moves. It’s not hard to see why: An FDA analysis estimated that more than 48 million additional naloxone doses would be needed if the agency officially recommended co-prescribing nationally.
Most states have limited the volume of opioids doctors can prescribe at one time and dramatically expanded access to naloxone. In California, for example, pharmacists can provide naloxone directly to consumers who are taking illegal or prescription opioids or know someone who is.
In the states with co-prescribing rules, patients aren’t required to fill their naloxone prescriptions, and those with cancer or who are in nursing homes or hospice typically are exempted.
Kristy Shepard of Haymarket, Va., was surprised to find a naloxone prescription waiting for her recently when she went to the pharmacy to pick up her opioid meds. Her first instinct was not to fill it. She did so only after the nurse in her doctor’s office pressured her to. The doctor had never talked to her about Virginia’s new co-prescribing law, she said. 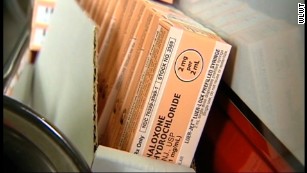 Overdose antidote availability doesn’t always mean fewer deaths, study says
“It’s so silly. I didn’t feel like I needed it. Unless I plan to hurt myself, I’m not likely to overdose,” said Shepard, 41, a registered nurse and hospital administrator who can no longer work and has applied for disability benefits.
But it may not be as difficult as some people think to overdose on prescription painkillers.
“You can take pain meds responsibly, and you can be at risk for an accidental overdose even when you’re doing everything right,” said Dr. Nathan Schlicher, an emergency medicine physician in Washington state and a member of the state hospital association’s opioid task force.
Two million Americans have an addiction to prescription painkillers, according to the FDA. And nearly 218,000 people in the U.S. died from overdosing on them from 1999 to 2017, according to the Centers for Disease Control and Prevention. During that same period, prescription opioid deaths rose fivefold, the CDC data show. 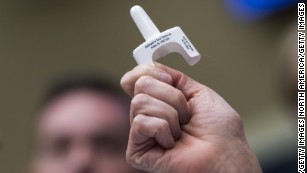 Surgeon general urges more Americans to carry opioid antidote naloxone
In California, doctors wrote nearly 22 million opioid prescriptions in 2017 and 1,169 people died that year from overdosing on prescription opioids. Common prescription opioids include Vicodin, OxyContin, Percocet, morphine, codeine and fentanyl.
To counter this trend, “states are scrambling for any policy lever they can find,” said Kitty Purington, senior program director at the National Academy for State Health Policy.
Even before the state mandates, pain specialists considered it good practice to prescribe naloxone along with opioid painkillers for some patients, particularly those with a history of substance abuse.
Doctor lobbying groups typically resist government rules regarding their practice, but medical associations in some states supported or at least remained neutral on naloxone co-prescribing mandates.
The companies that make the drug have spent hundreds of thousands of dollars collectively lobbying for their interests at the state level. 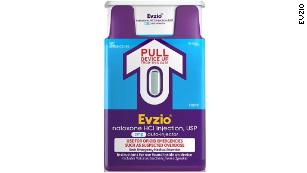 Kaléo to offer lower-priced opioid antidote
Kaléo, which makes the naloxone auto-injector Evzio, spent $77,200 in 2017-18 lobbying California lawmakers on bills expanding access to naloxone, including the state’s co-prescribing law, which requires doctors to offer prescriptions for naloxone to high-risk patients who get opioids.
In December, Kaléo introduced a lower-cost generic version of the injector after a Senate investigation found the company had raised the price of its branded version 600 percent from 2014 to 2017, to $4,100 for two injectors.
Adapt Pharma, which makes the naloxone nasal spray Narcan, spent $48,000 to lobby California lawmakers on the co-prescribing legislation.
One advantage of the co-prescribing rules is that they foster important doctor-patient conversations about the risks of opioids, said Dr. Farshad Ahadian, medical director at the UC San Diego Health Center for Pain Medicine.
“Most providers probably feel that it’s better for physicians to self-regulate rather than practice medicine from the seat of the legislature,” Ahadian said. “The truth is there’s been a lot of harm from opioids, a lot of addiction. It’s undeniable that we have to yield to that and to recognize that public safety is critical.”

Naloxone still stable months after expiration date, research says
But some doctors — not to mention patients — have reservations about the new requirements. Some physicians say it will be nearly impossible for states to enforce the mandates. Others worry that prescribing naloxone to patients who live alone is useless, because it typically must be administered by another person — ideally one who has been trained to do it.
Patients fear that naloxone prescriptions could unfairly stigmatize them as drug addicts and cause life insurers to deny them coverage.
Shepard, the disabled Virginia nurse and a mother of four, said she worries that her naloxone prescription could affect her chances of getting additional life insurance — a pressing question, she said, as her lupus worsens over time.
And a Boston-area nurse who worked at an addiction treatment program was turned down by two life insurers simply because she carried naloxone for her patients.
Get CNN Health’s weekly newsletter
The decision to prescribe naloxone “is something that should be between a doctor and a patient, because every situation is unique,” said Katie O’Leary, a 31-year-old movie production company office manager who lives in Los Angeles and was diagnosed with complex regional pain syndrome about five years ago.
“So many patients already jump through so many hoops to get their meds,” O’Leary said. “And if you live alone and don’t have family or friends to take care of you, the naloxone might not be something that could actually help.”
Opioid addiction and overdoses are a complex problem, and naloxone is just one part of the solution, said Dr. Ben Bobrow, a professor of emergency medicine at the University of Arizona College of Medicine.
“In the past, pain was the fifth vital sign; we thought we were doing a bad job if we were undertreating pain,” Bobrow said. “Inadvertently, we were harming people. We ended up getting all these people hooked. Now it’s our job to help them find other [ways] of treating their pain.”
[“source=edition.cnn.”]
Categories: Drug Tags: alongside, drug, FDA, may, opioid, overdose, prescriptions, recommend, reversal