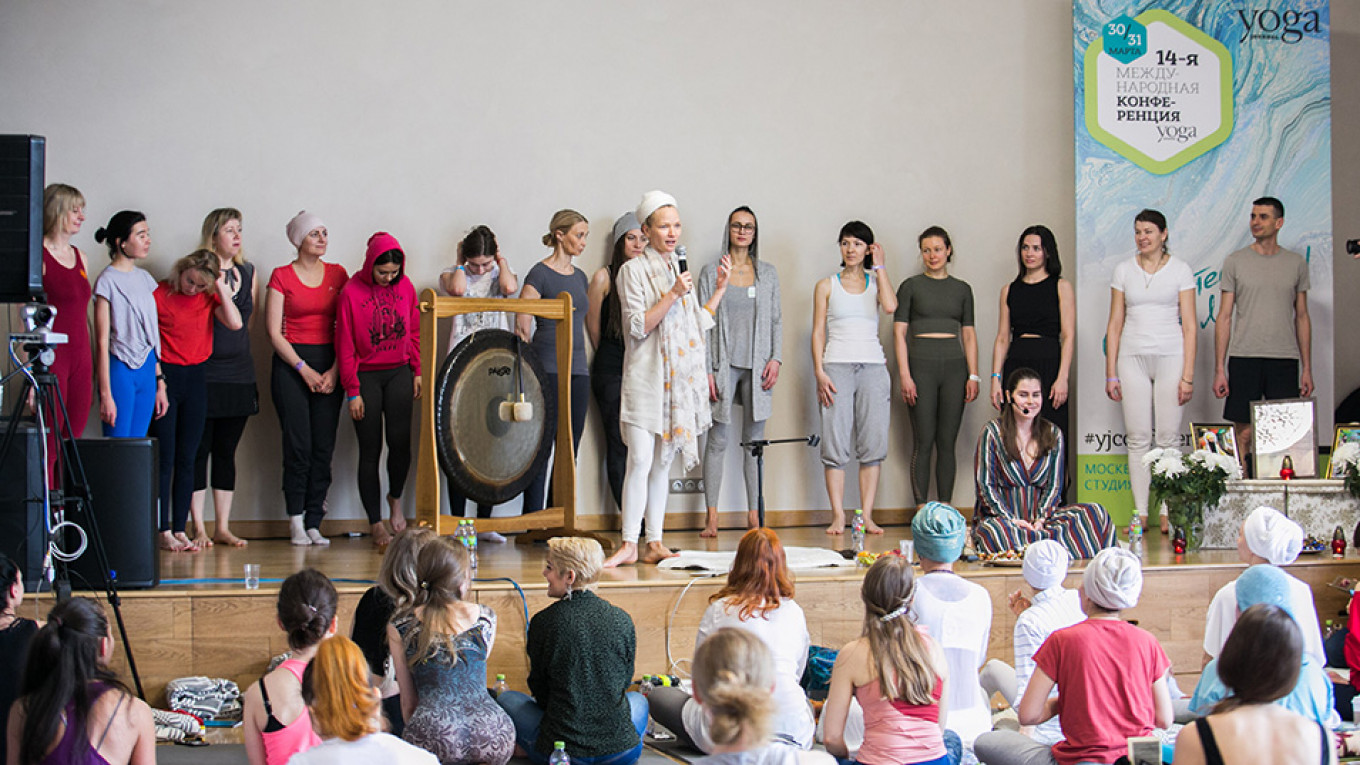 By the time Los Angeles-based celebrity meditation guru Mahan Kirn had taken the stage and folded her legs into lotus position in Moscow’s Prana Yoga Center on Saturday the enormous main studio was bunged to capacity, with each yoga mat bunched up against the next.

Wearing the white head covering and modest clothing that is traditional for the Kundalini yoga she teaches, and radiating good health and positive energy, she led a two-hour session that included instruction in her patented three-minute de-stressing techniques, inspirational anecdotes and lots of class discussion.

“You’re all here for an experience, right?” Kirn said at one point, and she didn’t disappoint.

“She’s like an angel,” said my mat neighbour Olga, who had traveled by overnight train from a small town in the north of Russia to attend the class.

Kirn was the big-name crowd-puller at Yoga Journal Russia’s 14th conference at the weekend, but the 800 yoga lovers who attended the 50 other classes and lectures over the two-day event were proof of yoga’s fast-growing popularity in Russia.

Just a few years ago yoga was a niche discipline in Russia, practiced by serious devotees in hard-to-find studios in apartment blocks. The authorities took a dim view of it, claiming that it promoted religious cults.

As recently as June 2015, officials in the central city of Nizhnevartovsk sent letters to two yoga studios telling them to stop classes, and told physical culture and education departments that the practice had an “occult character.”

But the mood changed when Russian President Vladimir Putin met India’s Prime Minister Narendra Modi at the 2015 BRICS summit in Ufa. Russia’s hardman — who has been pictured hunting, practicing judo and bare-chested horseback riding — vowed to give yoga a try, saying he’d he’d been put off in the past by the seemingly impossible perfection that yogis manage to achieve.

Today, every gym includes a least one yoga class in its exercise timetable and bright and welcoming new studios are popping up all over Russia.

Olga Movchan, Yoga Journal Russia’s marketing director estimated that the number of new studios opening in the country’s big cities has increased by between 30 and 40 percent over the past three years.

She added that the number of visitors to the Yoga Journal Russia’s website has increased by 80 percent to 1.8 million per month over the past year.

“Yoga’s popularity has grown massively, it’s seen as a very trendy and modern thing for young people to do,” she said, adding that a recent survey in the magazine showed that 42 percent of people doing yoga on a regular basis are between the ages of 25 and 34.

Prana opened in Spring 2018 and says its three locations in downtown Moscow housing 23 practice rooms make it the biggest yoga center in Europe. Its founders, Mikhail Galaev and Dmitry Demin, decided to invest in the center after making a fortune from selling knitting yarns and accessories.

Prana offers a wide range of classes ranging from hatha — the ancient base form of the discipline focusing on exercises, stretching and breathing — to newer forms such as AirYoga — where students practice suspended in hammocks attached to the ceiling.

There’s also Iyengar — which uses props such as bricks and belts to perfect poses and minimise the risk of injury — and the more dynamic Jivamukti — devised in New York in the 1980s and and beloved of Sting and Madonna.

Delia Abasova, 40, an AirYoga teacher from Astrakhan in Southern Russia, came to Moscow to attend both days of the conference and try Jivamukti yoga for the first time.

“I tried many other forms of exercise before I settled on yoga, and I’ll stay with it for life,” she said.

But yoga doesn’t just keep your body fit and your mind at ease, it can also work as physical therapy. That makes it useful and suitable for people of all ages.

Geert Van Leeuwen is an eminent Dutch teacher whose method — Critical Alignment Yoga — balances the anatomical and meditative parts of yoga with exercises that get deep into the spinal column to treat pain in the lower back, neck and head. It helps to release stress, which he describes as “a sniper that will hit without you knowing it.”

Van Leeuwen, who is 64 but looks much younger, has just opened a studio in central Moscow, having traveled to Russia regularly over the past six years and trained more than 100 local teachers in his method.

The space is gorgeous, with pale wood panelling, dark contrasting floors and high ceilings. The black rubber “headstanders” and curved wooden “backbenders” look comfortable rather than intimidating and the whole place smells of jasmine and is flooded with light.

Van Leeuwen said he has a long relationship with Russia and admires the way people in the country become very committed to yoga once they start to practice.

“I like the Russians, it’s a country coming from a long revolutionary background and they’re serious in their approach to life and yoga,” he said. “In my country if people come up against an obstacle they go to the left or the right of it, Russians connect with it.”